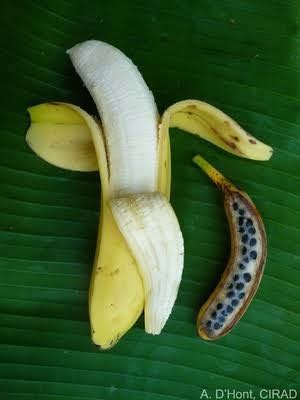 For this project my topic is about the industry, history and GMO’s of bananas. The production, consumption, and sale of bananas are important activities for many developing and low-income countries, generating employment, sustaining rural livelihoods, enhancing nutrition, and contributing to food security. Bananas are believed to have originated up to 10,000 years ago and some scientists believe they may have been the world’s first fruit.

The first bananas are thought to have grown in the region that includes the Malaya Peninsula, Indonesia, the Philippines and New Guinea. According to scholarly experts that have approached my topic they talk a lot about how gmos have affected bananas throughout history. Biotechnologist James Dale and colleagues at Queensland University of Technology in Brisbane argue that genetically modifying bananas has helped protect the fruit from diseases (​citation1​). We have completely changed bananas genetically so that there are no more original bananas that aren’t genetically modified. Dona & Arvanitoyannis argue that the results of a review published was that GM foods “indicate that they may cause some common toxic effects such as hepatic, pancreatic, renal, or reproductive effects and may alter the hematological, biochemical, and immunologic parameters” (​citation2​). Domestic bananas have long since lost the seeds that allowed their wild ancestors to reproduce. If you eat a banana today, you’re basically eating a clone. From an article called “All About Bananas” (​citation3​) it explains about bananas and that they are grown in more than 150 countries, and 105 million tonnes of fruit are produced each year. Bananas which are grown for local consumption are generally grown in traditional, extensive systems. Banana is an economically important cash crop as it fetches large revenue share in the domestic and international market.

However, most of the production is consumed by the domestic population as it serves as the staple food for them. Bananas are one of the most consumed and cheapest fruits worldwide. They are the most traded fruit and the fifth most traded agricultural product. The global export value of the banana trade was estimated to be US $8 billion in 2016, with a retail value between $20 and 25 billion.